Here is a screenshot of what the now infamous Conroy’s tag cloud would look like without the “censorship” attempt: 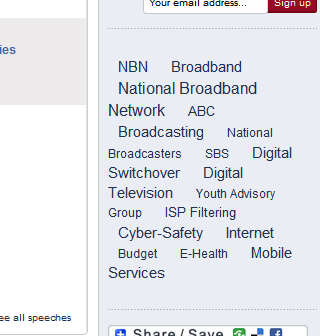 It’s certainly not hugely prominent and, frankly, I am disappointed about that. It would have been way funnier if it was the biggest tag in the cloud.

Here is the greesemonkey script for those that feel inclined to verify the screenshot. It’s very quicly hacked together and has the values hardcoded (which the original does too):

Update I was going to editorialize on this a bit more but forgot to do so before publishing. The whole debacle is frankly ridioculous and ironically goes to show two things: